1 °) One supposes the importance of natural selection. Certainly the island of Ouessant (Brittany), excessively windy, devoid of trees and offering few natural protections would have been able to favor the small animals. This explanation is partially acceptable in view of the small size which characterizes cows and horses on islands in the rough climate.

2 °) human selection would be more decisive. On the island of Ouessant sheep were raised in community. Now if the adults were identified by a cut with the ear registered in the city hall, lambs were not. During the sharing each had advantage in choosing the biggest lambs. A selection was then established because only the sickest animals assured reproduction. However, no serious study has confirmed this hypothesis yet! 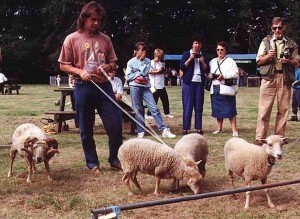 3 °) Some assert that the black would prevail because of a selection wanted by sailors’wives to make tissues without artificial tints. Nervertheless old photos and picture postcards show mainly white animals !

4 °) After the extension of the markets which privileged the heavy English races, the small sheep would have been practically eliminated from the landscape of the island towards 1925-1935.

5 °) Another comment, not still demonstrated, assured that these animals transported by the Greek cargo boat ” Mykonos ” which made wreck on Ouessant, sheep of badly identified race would have finished interbreeding!

A rigorous historic search should be made. If you possess documents or information it is with pleasure that we shall publish them on this site. When Mister Abbé and his friends began the rescue of the race in 1976, they relied on the herds of the continent used to decorate big domestic properties. Most of these continental breedings come   from the livestock of  De GOULAINES’ family which possessed  sheep of Ouessant for at least 100 years in their property of Saint Etienne de Corcoué in the country of Loire-Atlantique.

Due to the work of the G.E.M.O. the French herds go from 486 animals in 1977 to 3128 in 1996. It is thanks to its function of domestic animal that Ouessant’s sheep survived through this XX ° century. A standard, clearly established by ” the pioneers of the rescue ” and privileging aesthetic characters, now allows the motivated breeders to stabilize the race so as to guarantee its perpetuity.