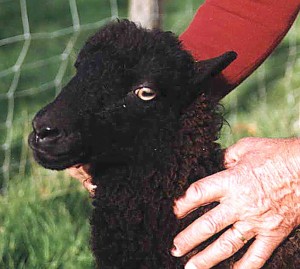 Fine and regular, with horns for rams, chamfer and forehead forming a line. Very light chamfer concerning the ram.

HORN : Dark for the blacks and the browns, clear for the whites, triangular, strong section, rolled up with a single spiral of big amplitude at a good distance from the head. 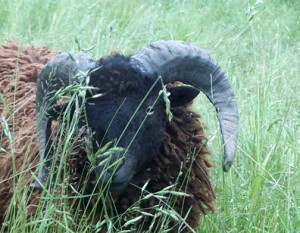 Circle, without plate of baleen, collars for rams.

Straight top line from the withers to the base of the tail.

Thin, of medium  length, well proportionned, good balances. Dark nails for the blacks and browns, clear for the whites.

Profoundly red for the white colour, hence a slightly reddish aspect, especially on the head, on the paws and on the tail.

Too much developed members.

For rams: too asymmetrical horns, either too frail, or too much squeezed, or too much pushed aside. Absence of horns.

Too long tail, too big ears, hooked chamfer to the ewe or too hooked to the ram.

Presence of drops under theneck.

Are admitted among  young lambs : For the blacks : small white mark on the forehead.

For the whites: red marks on the neck, the tail and the paws.

These marks soften with the age.

It appeared, very rarely, for certain ewes, small horns without osseous post. In the current state of observations, it can not be considered as a defect.

It is necessary to notice that simple births are characteristic of the race, double births are extremely rare and not popular.

Expanse : Fleece furnishing the forehead, a part of cheeks, dressing all the body and coming down at least to the knees and down to the hocks.

Pigmentation must be homogeneous in all the fleece.

Texture : Semi-closed fleece and well packed, locks from 8 to 10 cms for a growth of 12 months.

Presence of hairs and hétérotypes, fibers possessing a medullary canal. Location : throat, especially accentuated for the ram, the nape of the neck, at the bottom of the thighs. As the same nuance as the set of fleece, these hairs can be darker.

Heterogeneous colour, spots on the fleece.