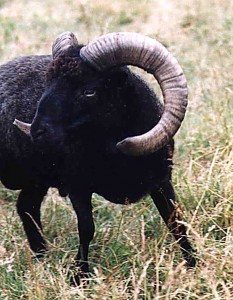 Recent studies and the chromosome analysis confirm that the domestic sheeps (Ovis aries) come mainly from the mouflon of Asia Minor ( Ovis musimon), the smallest of all the sorts of mouflons. The biggest being Marco Polo’s mouflon in Central Asia ( Ovis Ammon) with exceeding horns 1.9 m of length. Urial ( Ovis Orientalis) is classified in an intermediate size. As for the bighorn and for Dall’s mouflon, they represent North American variety show. And it is in Africa (Sahara) that one meets the mouflon with cuffs but it is not not a sheep. But the mouflon with cuffs is more a goat than a sheep.

The taming of the sheep begins 9000 years before J.-C. Just after that of the dog (search near Jériko and in Iraq). From Mesopotamia breeding would have extended towards Persia and towards Mediterranean pond. Several eras invade Europe : Urial up to Switzerland by way of the Balkans, the mouflon of Asia Minor up to Great Britain by way of Germany and Denmark, finally the Mesopotamian sheep on the Mediterranean coast by way of Egypt. Knowing also that mouflons remained in the wild state in Europe of the Middle Ages, it would be very risky to build the genealogy of the current races.

However it is acquired that the mouflon of Corsica does not deserve to be qualified as : it is really about a sheep wild after his extinction on the island about 8,000 years ago. At the end of the bronze age the sheep of the island of Soay had an identical lot ! These races possess indeed a woolly fleece which betrays their previous taming: to the mouflon only the undercoat of the coat is woolly. The people gradually selected animals to reduce the rough hair of jarre for the benefit of the fine woolly down. In this domain highlight will be reached at modern time with the mérinos of Spain which will colonize the New World and Australia.

Supplying wool, skin, milk and meat the sheep could only seduce the people. According to times and places they privilege one of these three qualities. In France, still at the beginning of the Middle-Ages, the sheep was considered for its production a dairy ptoduct. On the other hand at the end of this period and throughout modern times he had especially to supply the wool for the new industry. Finally, since the XIX °, he has at first to satisfy the stall of the butchers! This fast evolution gives evidence of its strong genetic variability. This one coupled with an excellent adaptability in natural constraints explains the variety of the local races : 52 officially recognized in France.